Simply put, The Federal Rules of Civil Procedure (FRCP) prescribe how federal civil lawsuits are governed. The FRCP is constantly evolving and many parts may change over the years. The FRCP is intentionally vague, with the idea that judges are not to be constrained by a rigid set of directives, and ultimately, judicial rulings will determine what the FRCP really mean and how they are to be applied.

And that’s why we created this guide -- to sort out the technical aspects of the FRCP as they relate to e-discovery, supported with relevant case law and expert opinions, in an easy to navigate and read format. Of course, there will always be more to learn about the nuances of the FRCP, but this is a great place to start.

US Court of Appeals and US District Courts 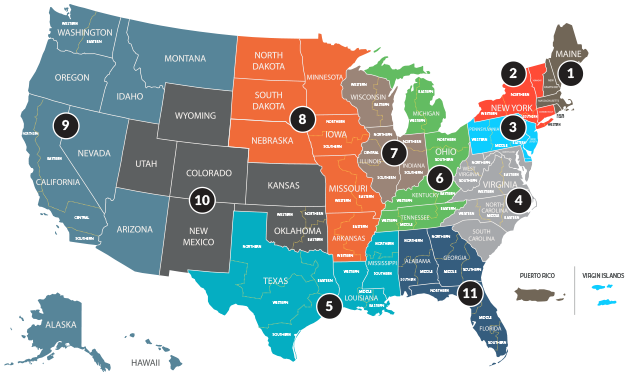 The FRCP applies to all federal courts, which are split between regional circuits and state districts.

What is the FRCP

The FRCP are regulations that specifically state the guidelines regarding procedure for civil litigation in US federal courts. Because of the federal jurisdiction of the FRCP, The Supreme Court is the body that establishes and/or amends them, usually with the recommendation of the Judicial Conference. Once the Supreme Court comes to an agreement on any changes, Congressional approval is needed as the final step.

How the FRCP Has Changed

The FRCP were first created in 1938, and have had 10 major revisions since that time. The revision that took place in 2006 created parameters for electronic records, which formalized e-discovery within the FRCP. Based on some ambiguity from the 2006 e-discovery amendments, the latest revisions to the FRCP in 2015 did much to clarify the rules specific to e-discovery.

The 10 Changes to the FRCP 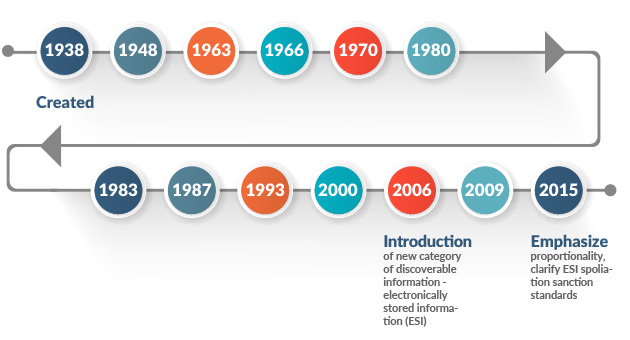 What is the Role of the FRCP in E-Discovery

After the e-discovery rules were enacted in 2006, a growing number of attorneys voiced their concerns about inconsistent case law with respect to the standards for spoliation in document production during the discovery process. Some courts required only a finding of negligence while others required bad faith. This inconsistency resulted in clients adopting an expensive “collect everything" strategy to avoid missing any potentially responsive documents.

In 2015, the FRCP were amended again, this time with a specific intent on the so called “e-discovery rules,” focusing on three key areas:

Each of these aspects can be traced back to the first rule in the FRCP.