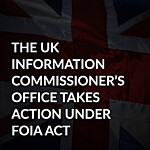 The UK Information Commissioner’s Office (ICO) issued two actions against government agencies under the Freedom of Information Act 2000 (FOIA), including its first enforcement action in seven years, signalling that it will be joining other regulators and DPAs in more vigorous enforcement of existing regulations.

On 8 September 2022, the ICO issued two FOIA actions: an enforcement notice to the Department of International Trade (DIT) and a practice recommendation to the Department for Business, Energy and Industrial Strategy (BEIS) for persistent failure to respond to Freedom of Information (FOI) requests within the required time limit.
The enforcement action against DIT comes on the heels of poor performance in meeting the required timelines for FOI requests—from January to March 2022, DIT had the worst response figures in the government, with over 50% of its responses being sent late. Its response time also fell the prior year, despite no apparent change in request volume or staffing circumstances. The action requires DIT to respond to its backlog of outstanding requests older than 20 working days within 35 calendar days and to publish an action plan to address any future delays.
Government FOI statistics also showed that BEIS consistently failed to respond to FOI requests on a timely basis; however, the delays were more understandable as BEIS has received a 55% increase in requests since 2020. Since BEIS engaged with ICO and had these mitigating circumstances, it received only a practice recommendation defining the steps it should take, including developing an action plan to improve performance, rather than a more serious enforcement action.

Who it Applies to:

While the ICO only took actions against two departments, there is no doubt that they intend for all government agencies to heed the requirements of FOIA 2000. John Edwards, UK Information Commissioner, issued a statement indicating ICO’s “new approach” to FOIA regulation, “I advise public authorities to take note and learn lessons from the action we have taken today, as we will be making greater use of our powers under the Act to drive good practice and compliance.”