Rule 37(e): Just Be Reasonable When it Comes to Electronically Stored Information

Rule 37(e) is not about perfection when it comes to preserving electronically stored information (ESI), but reasonableness. Which means, parties took reasonable steps in good faith to preserve and produce requested ESI. However, reasonableness is a subjective concept, and that’s where this rule comes in: it creates a standard to guide everyone involved.

“If electronically stored information that should have been preserved in the anticipation or conduct of litigation is lost because a party failed to take reasonable steps to preserve it, and it cannot be restored or replaced through additional discovery, the court:

Everyone wants to know what the consequences of an action are, especially if those consequences could possibly have a huge monetary impact. That’s why 37(e) is maybe the most talked about e-discovery rule in the Federal Rules of Civil Procedure (FRCP), because it sets the standard for curative measures in the case of spoliated ESI.

Before the Creation of Rule 37(e)

The old rule, before the 2015 amendment, was vague regarding when parties could be penalized for the loss of requested ESI, stating only that sanctions could not be levied if data was lost as a result of the “routine, good-faith operation of an electronic information system.” This led to different standards across US circuit courts on what constituted spoliation of ESI.

The new Rule 37(e) doesn’t depart from the common law duty to preserve relevant information, but rather authorizes specific measures that the court may employ in those instances where information that should have been preserved was lost, and more importantly, it specifies the findings the court must make in order to impose curative measures (which the rule states “no greater than necessary to cure the prejudice” to the aggrieved party) or more extreme measures (monetary penalties, entering a default judgement, or case dismissal). With this in mind, a 5-part test was created for deciding whether spoliation sanctions apply, which attempts to clarify ambiguity and create standardization across the US federal courts. 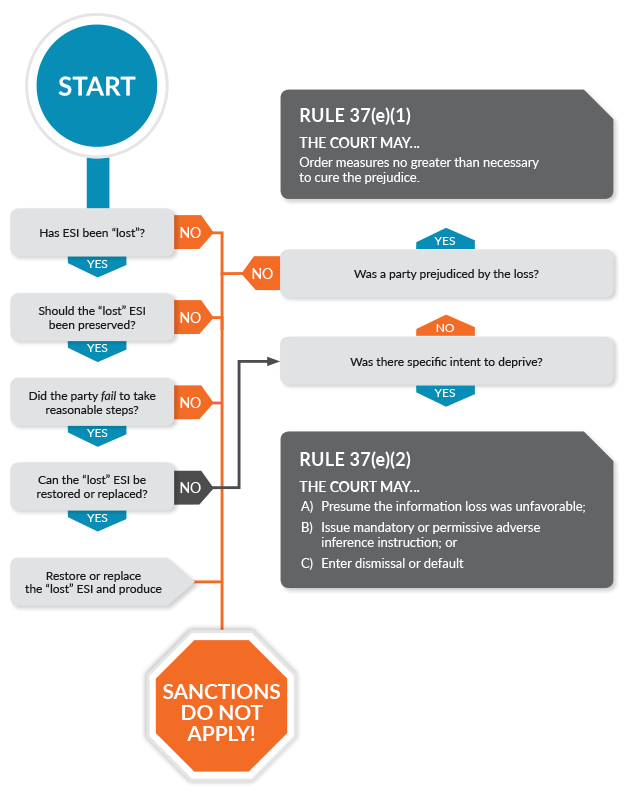 While the 2015 amendment does lay the groundwork for a more standardized approach to data spoliation, the way the rule is interpreted by the courts is integral to defining the rule, and recent case law shows a range of examples on how this is taking place.

For example, in Archer et. al. v. York City School District, et. al. (M.D. Pa. December 28, 2016), the key issue in this case was whether an email account was deleted with prejudice. The court ruled that there was no factual basis to prove an intent to destroy evidence, with the defendant following the standard practice of deleting email accounts 90 days after an employee leaves the company. Add this to the fact that took place a year before litigation began, proving the defendant had no duty to preserve.

On the opposite end of the spectrum, in First Financial Security, Inc. v. Freedom Equity Group (N.D. Cal October 7, 2016), the defendant failed multiple times to produce relevant ESI after being instructed by the court to do so. In response, the court stated that the defendant had “an obligation to preserve text messages in the anticipation or conduct of litigation, that [defendant] took no reasonable steps to preserve text messages” which “cannot be restored or replaced through additional discovery and that [defendant]’s agents acted with the intent to deprive [plaintiffs] of the use of the deleted text messages.”

But make no mistake, bad faith behavior will be met with sanctions, sometimes very severe, as is shown in Arrowhead Capital Fin. Ltd. v. Seven Arts Entertainment, Inc. (S.D.N.Y. September 16, 2016). In this case, the defendants offered the court an ongoing list of improper and reckless behavior, including the CEO directing his lawyers to not produce responsive ESI, improper objections to e-discovery requests, intentionally including non-responsive documents in a production set to slow down discovery, failure to produce key custodians for depositions, and failure to pay bills to 3rd party server provider, resulting in destruction of responsive ESI. To make matters worse, the defendants’ attorney admitted to not even reviewing the discovery responses from the CEO. Based on this egregious list of activities, the court brought sanctions against the defendant, as well as the CEO and attorney themselves, for their flagrant behavior.

The new Rule 37(e) met the demand for relief from “e-discovery extortion” coming from corporate interests seeking to avoid “over-preservation” and its attendant costs. Prior to the Rule change, corporations holding terabytes of information often faced the Hobbesian choice of preserving everything imaginably relevant or running the risk that years after the commencement of a case, a court might determine that some unpreserved ESI-- that was viewed at the time of preservation as irrelevant or of marginal value-- should have been preserved and impose a drastic sanction for the preservation failure.

Learn all the ways you can be sanctioned under the FRCP beyond Rule 37(e). Download 7 Ways to be Sanctioned for E-Discovery Misconduct.

Under the new Rule, a documented reasonable, good faith and thoughtful preservation plan should go far in warding off dispositive sanctions, or, what is almost the equivalent, an adverse inference instruction to the jury.

But while addressing corporate concerns, the new Rule frustrated elements of the plaintiffs’ bar.  If a failure to preserve evidence that should have been preserved results in substantial prejudice, why should the court be limited in applying an appropriate remedy --even dismissal or an adverse inference instruction-- because the complaining party cannot meet the excruciatingly high standard of demonstrating that the evidence was lost as part of a strategy to deprive the party of the use of the information in the litigation.

Our justice system is built on the discretion of courts to accomplish justice; why tie a judge’s hand in these factually complex situations involving the loss of otherwise discoverable information that cannot be restored or replaced?

The new Rule’s application is being watched carefully. Will future amendments be necessary?