Rule 34 is directly tied to Rule 26(d)(2), which sets down the timing for a discovery request, effectively starting the race to find the facts of a case, and in turn giving the parties insight into what their litigation strategy might be going into the meet-and-confer conference. However, just because you get there first doesn’t mean you’ll win. Especially if you arrive unprepared. 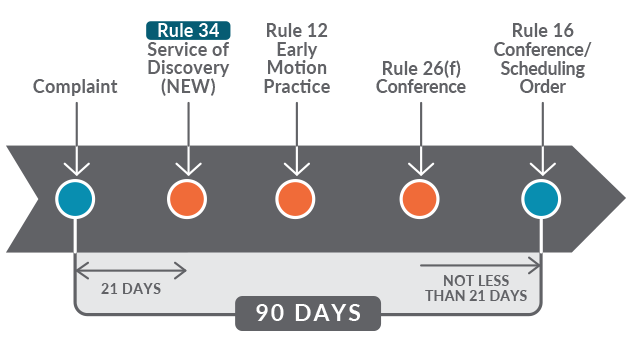 Rule 34: Producing Documents, Electronically Stored Information, and Tangible Things, or Entering onto Land, for Inspection and Other Purposes

The above is just a snippet of the rule as it relates to e-discovery.

With the recent e-discovery amendments, a change in Rule 26(d)(2) states that either party can issue a Rule 34 request for documents 21 days after the service of summons and complaint, which allows each side a glimpse into the relevant information as soon as possible.

But, the new amendment to Rule 34 states that objections must filed “with specificity.” And yet, most attorneys are still using boilerplate responses, putting them in violation of the rule. So even if they respond early, if that response is broad, it doesn’t matter.

There are a few ways legal teams care ensure compliance with Rule 34. One is to throw out old “form files.” Form files or generic, boilerplate templates will no longer be accepted by the courts when responding to discovery requests.

Examples of Boilerplate Objections (which are no longer acceptable)

Slow Down and Actually Read the Request

Another key step, which may seem obvious, but is often ignored, is to carefully read and ensure you understand what the discovery request is asking. If you have questions, pick up the phone and call opposing counsel.

Clarify with Your Team

It’s also important to get feedback from your legal team. Work with your team to fully understand if the discovery request is asking for relevant information and that the amount of data is proportional to the needs of the case.

Quickly understand what key metrics you should be tracking to assess if the discovery request is proportional. Download Benefits of Measuring E-Discovery Metrics White Paper.

Be Specific if You Must Object

Finally, and probably most importantly, if you are going to object, give a specific reason why you’re objecting that includes a factually detailed response describing how it’s unduly burdensome. To prevent yourself from using boilerplate objections, you need more information about the case sooner, so you can specify why you’re objecting. To accomplish this, look into ways to update and accelerate your ECA process in order to get case information sooner and metrics for justifying burden.

How to Successfully Object to a Discovery Request

According to Judge Andrew Peck from the Southern District of the New York, do the following:

Much attention has been given to amended Rule 34(b)(2)(C), and rightfully so, because it now requires that objections to a discovery request be specific.  Old habits die hard, and case law continues to be rife with examples of frustrated judges lecturing lawyers to heed the rules and state objections with specificity. The bar is slowly making adjustments.

But the bar has quickly learned that the amendments to Rule 26(d)(2), which permit a party to submit Rule 34 requests merely 21 days after service of summons and complaint, is a game changer

Before the 2015 amendments, the defendant did not typically consider doing any serious discovery until after the Rule 26(f) meet and confer meeting, which is generally held 21 days before a Rule 16 scheduling order is due, or approximately 69 days after service of the complaint.  The rules had forbidden any discovery until after the meeting.  The thinking was that the parties needed the Rule 26(f) meeting to talk about the issues and identify what was needed in discovery.

Amended Rule 26(d)(2) now permits the plaintiff to submit Rule 34 requests only 21 days after service of summons and complaint, or 69 days earlier than previously permitted.  It is true that the defendant is not required to respond to the Rule 34 request before the Rule 26(f) meeting; the response is due 30 days after the Rule 26(f) meeting.  But the amendments are designed to accelerate the discovery process and prompt lawyers to be prepared at the Rule 26(f) meeting to address specific discovery issues, after reviewing initial exchanges. “This relaxation of the discovery moratorium,” as stated in the Committee Note, “is designed to facilitate focused discussion during the Rule 26(f) conference. Discussion at the conference may produce changes in the requests. The opportunity for advance scrutiny of requests delivered before the Rule 26(f) conference should not affect a decision whether to allow additional time to respond.”

These timing changes make a lot of sense in garden-variety cases, in which modest discovery was being delayed unnecessarily. And, in fact, many lawyers had ignored the rule and had informally begun discovery before the Rule 26(f) meeting.  But the changes have an enormous impact on complex and heavy-ESI cases and place a significant burden on the defendant in these cases to move expeditiously.  Before 2015, the defendant had several months to act on discovery. Time that was used to learn the case and begin planning for comprehensive discovery, which often involved multiple locations, custodians, and systems. Under the 2015 amendments, defendants have only 21 days after being served to begin working on discovery. The message is clear that lawyers must be prepared to move on Day 1.