This new emphasis on proportionality gets a jump start with the revised language around the meet-and-confer conference. With the deadline falling sooner (90 days after the complaint is filed instead of 120), and a requirement to come prepared with a deep knowledge of your case and your data, clear objectives for discovery, and any issues with privlege or protection that may need an order under FRE 502, this meeting changes from a procedural obligation, to another aspect in fulfilling the goals of Rule 1, keeping litigation to “just, speedy and inexpensive.”

To know if e-discovery parameters are proportional to your case, you must know what data is relevant to the case early in the process, and having to create and share a discovery plan at the meet-and-confer meeting, allows you to go into the discovery process with a laser-sharp focus on what you need to collect, review, and produce, which saves all parties time and money.

Unless otherwise limited by court order, the scope of discovery is as follows: Parties may obtain discovery regarding any nonprivileged matter that is relevant to any party’s claim or defense and proportional to the needs of the case, considering the importance of the issues at stake in the action, the amount in controversy, the parties’ relative access to relevant information, the parties’ resources, the importance of the discovery in resolving the issues, and whether the burden or expense of the proposed discovery outweighs its likely benefit. Information within this scope of discovery need not be admissible in evidence to be discoverable.

Factors the Court will Use to Determine Proportionality

Rule 26(f)(1-2) Conference of the Parties; Planning for Discovery

Except in a proceeding exempted from initial disclosure under Rule 26(a)(1)(B) or when the court orders otherwise, the parties must confer as soon as practicable—and in any event at least 21 days before a scheduling conference is to be held or a scheduling order is due under Rule 16(b).

In conferring, the parties must consider the nature and basis of their claims and defenses and the possibilities for promptly settling or resolving the case; make or arrange for the disclosures required by Rule 26(a)(1); discuss any issues about preserving discoverable information; and develop a proposed discovery plan. The attorneys of record and all unrepresented parties that have appeared in the case are jointly responsible for arranging the conference, for attempting in good faith to agree on the proposed discovery plan, and for submitting to the court within 14 days after the conference a written report outlining the plan. The court may order the parties or attorneys to attend the conference in person.

This is just a snippet of the rule, which applies specifically to e-discovery.

How to Determine What is Proportional

Defining the scope of discovery isn’t just about determining relevancy, but also determining what is proportional. That’s where the Proportionality Analysis Flow Chart comes in handy. Each of the six factors in the court’s proportionality analysis will be weighed equally against each other, and by answering these questions, you can easily have an idea of which ESI falls under a matter’s definition of scope. 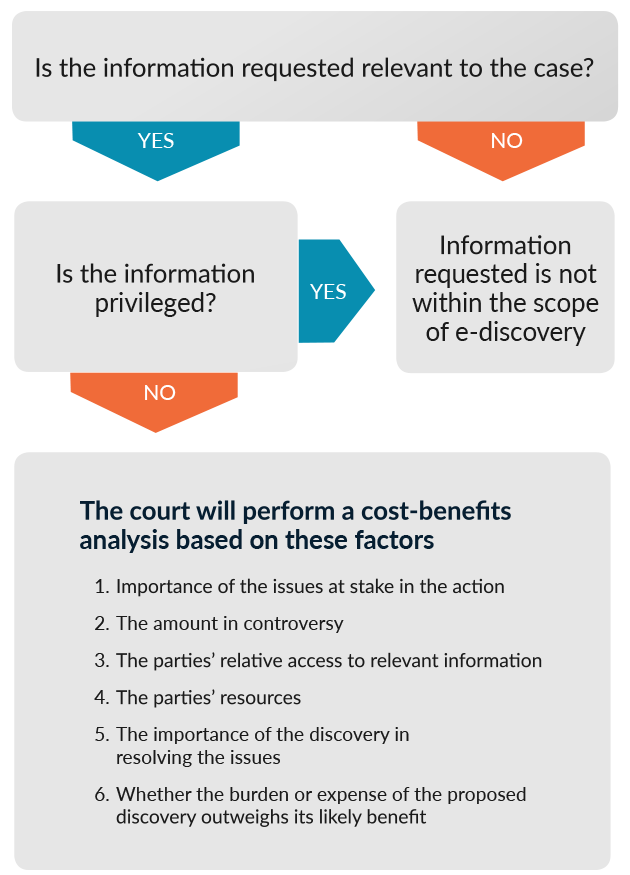 Another thing to keep in mind about Rule 26 is that it’s meant to foster a sense of cooperation between the parties – both the requesting and responding parties have the burden to prove that their e-discovery parameters are proportional. Another example of how cooperation is built into Rule 26, the rule will no longer permit discovery about discovery requests. But now, courts expect parties to work out a plan regarding discovery and move toward a resolution based on that plan.

Where does this idea of cooperation come from?

In the 2015 FRCP amendments, the framers added a new committee note to rule 1 stating, “parties share the responsibility to employ the rules in the same way. Most lawyers and parties cooperate to achieve these ends. But discussions of ways to improve the administration of civil justice regularly include pleas to discourage over-use, misuse, and abuse of procedural tools that increase cost and result in delay. Effective advocacy is consistent with — and indeed depends upon — cooperative and proportional use of procedure.”

A few things to remember about the Rule 26(f) Meet and Confer:

Know where your potentially relevant data is stored and what it takes to collect it. Too often, legal teams find themselves required to collect data and they have no idea where it is; and, once they do find it, realize that they may not have the tools to collect it. By understanding your data, you not only save time and stress when it comes to collection, but you also will have advanced insight into potential ways that you might be able to reduce the burden and/or cost of e-discovery, as well as understanding if there are any considerations regarding privilege.

Take The Meet & Confer Seriously, it Will Pay Off

Additionally, the meet and confer is a great chance to clearly understand what the key issues of the case are for the opposition and determine where you can find common ground. Take this opportunity seriously. By conducting a meaningful meet and confer, which should include an IT representative from each side, parties can create an e-discovery protocol that empowers both sides to quickly find and review the key pieces of evidence to the case.

If You Can’t Reach an Agreement, Do This…

If you’re unsatisfied try first to present alternative options to the other side. If that is unsuccessful and your opponent decides to file a motion to compel, explain to the judge through cost metrics why you decided not to comply. Speculation or boilerplate responses will not be accepted by the court.

Metrics to include in your argument for adjusting the scope of e-discovery:

One easy way to ensure e-discovery costs don’t get out of hand too quickly is to suggest a phased discovery approach, ensuring that the ESI that are most at risk, easiest and most obvious are preserved and collected first.

In this long, drawn out case, the plaintiff filed a motion to compel the defendant to a “formal production” of all documents pursuant to the parties’ agreed upon protective order.

The court rejected this motion based on the factors below:

According to Hon. John Facciola, retired US Magistrate Judge in the District of Columbia, “we don’t know too much about the fundamental facts of this case, other than it’s a battle between two lawyers who aren’t getting along. It’s really a matter on whether they had clearly communicated with each other, and whether or not some privileges were waived, none of which is terribly important. What is important about this case is its approach to discovery: although the lawyers did not brief the issue of proportion, the court did and said, ‘I am only permitted to allow proportionate discovery.’”

The important point about proportionality in Armstrong Pump v. Hartman is that it’s a function of the definition of legitimate discovery. Now, the only discovery permitted by the new rule is as to matters that are relevant to the claim or defense. Under the amended rule, the Court has an obligation to limit the frequency or extent of discovery if:

With the ruling of In re Bard IVC Filters Products Liability Litigation (D. Ariz. September 16, 2016), we see a great example of scope being determined by proportionality as well as relevancy. In this case, the parties disagreed on the discoverability of certain electronically stored information (“ESI”) generated by foreign entities (subsidiaries or divisions of defendant C.R. Bard) that sell IVC filters abroad. The plaintiffs sought discovery of communications between the foreign entities and foreign regulatory bodies regarding the IVC filters at issue in this case.

In the proportionality analysis, the Defendant persuaded the court that a significant burden was required to collect 13 years of communications from 18 foreign subsidiaries. Defendant also explained why the vast majority of these communications were already going to be captured through their U.S. ESI searches. Given the limited relevance of the small amount of unique information that might be gained through such an effort, the court concluded that the discovery request of these foreign entities is not proportional to the needs of the case.

BY: Hon. John Facciola, Ret. US Magistrate Judge, US Disctrict Court for the District of Columbia

Judge Campell then pointed out that despite the change in the Rule, courts were still using the "reasonably calculated” language to define the scope of the discovery, noting, with chagrin, that “[o]ld habits die hard.” Obviously, those cases were wrongly decided.

Now the only standard is a far simpler one: is the evidence sought to be discovery relevant to a claim or defense and, even if it is, is it proportionate to the needs of the case?

Judge Conti performed a similar service in Cole’s Wexford Hotel, Inc v. Highmark Inc., (W.D.2016). Another phrase used by judges and lawyers to define the scope of discovery appears in the 1970 version of Rule 26 which authorized discovery of (inter alia) “any matter… which is relevant to the subject matter involved in the pending action. In the Oppenheimer case the Supreme Court explained the key phrase of the definition – “relevant to the subject matter involved in the pending case”– have been construed broadly to encompass any matter that bears on, or that reasonably could lead to other matter that could bear on any issue that is or may be in the case.

It is not surprising that Judge Campbell’s decision is being frequently cited by courts who now discuss with precision the scope of discovery as now defined by amended Rule 26. To his delight, those old habits seems to be finally dying. Unfortunately, the only thing that dies more slowly than old habits is “boilerplate” such as definitions of the scope of discovery, buried in old word processing files, that are based on version of the Rule that no longer exist. The time is long past due for lawyers to eliminate that and to substitute for it a conscientious effort to explain clearly and with evidentiary support why the evidence demanded is or is not proportional to the case.