Is data storage actually “cheap?" Ask an IT professional that question and you are likely going to get a resounding “yes." That response is understandable when you consider the costs of media associated with data storage.


Mathematician and software engineer Matthew Komorowski has tracked hard drive costs over the years on a per gigabyte basis. He's displayed his data in a cool graph, which you can view here. In 2000, it costs approximately $14 to store 1GB of data. By 2005, the price was down to 75 cents. This year, it costs roughly 3 cents to store 1GB of data. With figures like that, it's no wonder we hear so much about cheap data storage – and that doesn't factor in the even cheaper storage offered from the Cloud.


But there is a “collateral cost" associated with hoarding data that can't be captured by looking at the price of physical data storage. This was the subject of a recent article published in Bloomberg BNA titled, “ Legal Considerations for Defensible Deletion Practices." Authors Jim FitzGerald, formerly of Exterro, and Rich Vestuto, an attorney and director for Deloitte's Discovery and Dispute Services, assert, “For organizations subject to frequent litigation, regulatory requests and compliance audits, the untended, growing volumes of electronically stored information (ESI) held in data repositories significantly raises costs and risks of eDiscovery."


The authors cite some staggering statistics to help support their position. According to Chicago law professor William H.J. Hubbard's 2014 "Preservation Costs Survey," larger organizations spend in excess of $40 million per year on preservation costs alone. The survey also reveals that slightly less than half of all preserved data is ultimately collected, processed and reviewed. Moreover, lowering time spent on legal holds by just 3 percent would save the average large organization more than $1 million per year, according to Hubbard's survey.


What do these numbers tell you? Storage may be cheap. But preservation certainly is not.


According to the article, the solution is for companies to develop defensible deletion practices that reflect “adherence to clear business goals" and should be “ongoing, consistent, and effective." 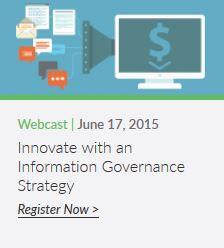 A defensible deletion strategy encompasses a multitude of policies, processes and considerations. At the center of the defensible deletion strategy will be a solid information retention and disposition policy that has executive buy in and is rigorously enforced. Another critical element is a consistent legal hold and data preservation process that works in tandem with - not against - the regular retention policy.


To learn about incorporating defensible deletion into a larger information governance program that supports legal requirements and business goals, register for Exterro's upcoming webcast on June 17, “ Innovate your Legal Department with an Information Governance Strategy."