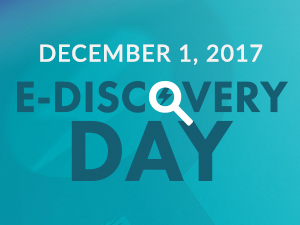 One of the day’s most anticipated webcasts was our recap of the top e-discovery news stories with Ethan Bowers of Bloomberg Law, Joe Patrice of Above the Law, and Zach Warren of LegalTech News. In their discussion, Ethan, Joe, and Zach managed to cover a lot of ground, with the following highlights:

Each of the panelists offered their thoughts for issues that would be important in 2018, as well. They included the need for legal teams to understand and be involved with discovery processes; to cooperate with opposing counsel or risk court sanctions; and to be aware of what’s happening during data transfers, as the law is in flux on these issues, especially in terms of GDPR’s rollout in May.

We’ve recapped the issues here, but if you’re curious to have a complete review of the year in e-discovery news, you’ll definitely want to listen to the on-demand webcast, available on Exterro’s Webcast Resources page on Monday, 12/4/17!


Tim has written professionally for 15 years, the last 10 as a B2B marketing writer. He can be reached at tim.rollins@exterro.com.

More blog posts by Tim Rollins >>
Ready to learn more?
Exterro is your complete solution for managing data across litigation, compliance and privacy obligations.
Get a free demo