Data collection and attorney review tend to get a bulk of the blame for contributing to rising e-discovery costs. However, a new survey commissioned by the Civil Justice Reform Group and conducted by Professor William H.J. Hubbard from the University of Chicago Law School reveals that preservation is responsible for its own share of cost burdens. Among the largest of the 128 companies that participated in the “Preservation Costs Survey," preservation costs range as high as $40 million per year! These costs stem from a variety of sources, according to the survey's official Summary of Findings, including implementation of automation systems, maintaining necessary staff to manage the preservation process and the time employees spend complying with preservation-related activities. The survey covered a plethora of preservation-related themes. Here are a few key takeaways:

The survey data refutes the popular notion that large organizations are constantly bombarded with large, complex matters. While the frequency of litigation for the largest companies is most definitely unrelenting, most matters are relatively small, involving twenty custodians or fewer.

According to the survey, about five percent of matters account for more than half the legal holds issued and it's these relatively infrequent matters that produce the greatest preservation burdens.This isn't surprising; a matter involving 500 custodians will naturally demand more time and attention than one involving 20 custodians. However, this trend may also shed light on the inadequacy of current preservation approaches. For example, email and spreadsheets, still commonly used by organizations as their primary means for managing the legal hold process, can be sufficient for small matters. However, such tools don't scale, and for matters involving hundreds of legal hold recipients, it becomes less and less feasible for legal teams to rely on manual processes. In these scenarios, organizations are typically left with the options of either bringing in external assistance to help manage the process (at a significant cost, of course) or, if the organization has a large enough internal legal team, they may simply assign one or more staff members to be devoted to legal hold management full time. Neither option is particularly efficient or economical.

A majority of preserved data is never collected and processed

Organizations that rely on the 'collect everything' approach should take note that the largest companies surveys reported preserving far more data than they collect and process. According to the Summary of Findings, “companies repeatedly expressed in interviews that they are deliberately 'overinclusive' or 'overpreserv[ing]' to protect themselves…" This is the model that e-discovery experts have long advocated: preserve broadly, collect narrowly. It reflects a necessary balance of risk aversion and cost savings. 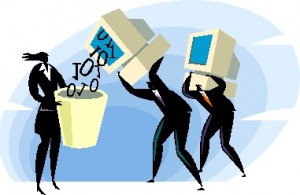 Organizations that engage immediate, broad collections at the outset of a matter – commonly known as the 'collect to preserve' approach – often do so out of fear that a less aggressive approach will be deemed inadequate by a judge. In point of fact, courts rely on a standard of reasonableness and consider proportionality, which takes into account the idea that it's overly burdensome to require parties to collect every bit of data that may be pertinent to the issues of the case.

Another factor that drives organizations to over-collect is a lack of confidence in other preservation approaches. Repeated incidences of custodians ignoring legal holds and deleting potentially relevant electronically stored information (ESI) is reason enough to prompt any organization to adopt a 'play-it-safe' mentality. Rather than start collecting broadly, a much more sensible response is for legal teams to identify preservation gaps that are leading to the issues in the first place, which may mean investing in a dedicated legal hold system that accounts for the need to periodically remind custodians of their obligations and facilitates communication between the legal hold recipient and issuer, should confusion about the request arise.

Not surprisingly, survey respondents voiced strong report for proposed amendments to Rule 37 of the Federal Rules of Civil Procedure (FRCP) that would create a uniform set of guidelines concerning sanctions when a party fails to preserve discoverable information. Rule 37 has received a lot of attention and spurred ample debate. According to the Summary of Findings, “the costs imposed by the uncertainty created by the current environment of conflicting legal precedents" was a repeated refrain from survey recipients.

Several federal judges have argued that specific guidelines will have the adverse effect of encouraging negligent preservation behavior if they are too lenient. Respected e-discovery attorney and expert Craig Ball also observed in a recent blog post that those in favor of amending Rule 37 seem to be ignoring the fact that the “incidence of spoliation sanctions in federal court is historically less than the national incidence of death by lightning strike."

Putting aside the merits of the debate, FRCP changes should not be regarded as an e-discovery panacea. Organizations should focus far more attention on shoring up internal efficiencies and developing better preservation processes than simply waiting around for changes to the rules, which wouldn't take effect for at least a year, if at all.

More blog posts by Andrew Bartholomew >>
Ready to learn more?
Exterro is your complete solution for managing data across litigation, compliance and privacy obligations.
Get a free demo
Watch a live demo webcast